Subway Surfer of the Future

Run
Run all you can 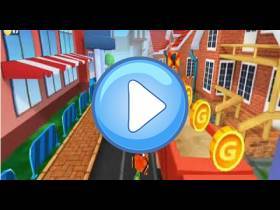 The game of Subway surfers came strongly to phones around the world for its addictive mechanics of playing. Now it is a success and has already become a classic of the Android and iOS store. If you still do not know this game, we bring you the PC version, which covers the way of playing Subway surfers so you can enjoy this crazy adventure. This is a somewhat hooligan boy who has been dedicated to making graffiti on the train cars. Suddenly, he is surprised by the security guard and his dog, so we will have to make a great escape to avoid capture. In this flight, we will find obstacles that can be skipped, you can pass underneath or both. In addition, this race will take place between the train tracks and there will be many of these vehicles circulating through them. We will have to dodge them, in addition to the obstacles, to survive and ensure that the security guard does not catch us. All this, while we collect the coins that are on the road and also the special items that will make you improve your score. The end of the game is that you survive as long as possible and reach an unattainable personal record for the rest of the players. Challenge your friends to this version of Subway surfers and check who is the best fleeing the security guard.
Enjoy the game Subway Surfers, it's free, it's one of our subway surfers games we've selected.